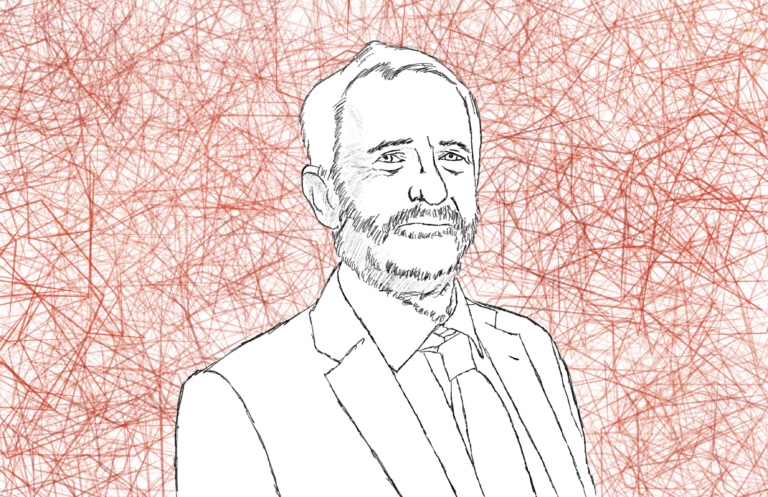 The threat posed by Jeremy Corbyn to the powerful and privileged in Britain at the 2019 general election was far more severe than the one from Clement Attlee in 1945. While his Labour Party manifesto may have just laid out plans for a return to post-war norms of a “civilized” European social democratic state, Corbyn’s ambitions have long lain deep in English history, with movements like the Diggers in the 17th Century and the wider workers’ movements of the 1920s General Strike years.

Arguably, well known for decades in elite circles, Corbyn represented not just the fiery trade union base associated with Arthur Scargill during the 1980s Miners Strike – the closest Margaret Thatcher came to be overthrown – but also he represented the fight against neo-colonial power. He has always been on the right side of history, often evidenced by photographs and video, notably his arrest when protesting Thatcher-backed apartheid South Africa. Corbyn was never another Attlee. The 1945 Labour leader lauded for introducing “British socialism”, understood why rubber money from the genocide of communists in the Malaya Emergency could be used for the creation of the National Health Service. And Attlee understood the need for Britain to play its part in the slaughter of 20 percent of Northern Korea’s population. He knuckled down to Truman’s orders for the UK to host US nuclear weapons bases without telling parliament. No one could could see Jeremy Corbyn doing that. For him, humanity has always been equal, worldwide. And what’s even worse for the ruling classes – they knew Corbyn understood the centuries of pain.

The 2019 UK election results demonstrate that most people do not desire the atomized neoliberal model of society catalysed by Washington Consensus politicians James Callaghan and Margaret Thatcher. There was still a majority of votes cast against Johnson. The concept of council, neighbourhood and street-level community still matters. It is why Boris Johnson’s Conservatives were forced into making pledges on the National Health Service – the crucial “cradle to grave” system signalling the UK together despite private contractor interference powered by Tony Blair’s Labour Party and successive governments. Extra funding of the National Health Service, though, is now inefficient funding because of the skimming off of profit by multinational firms. Extra taxpayer money for public services merely disappears into a rabbit-hole of corporate contractor profits and as services fail to improve then so do elites argue for yet more privatisation in a vicious cycle. Nevertheless,  Johnson was forced into making promises about centralized funding – he could not, as he has done before in parliament, actually argue for the virtual end of the NHS against Jeremy Corbyn. He would have lost the election. As for the lethal inequality destined to arise from NHS funds effectively disappearing into tax havens, Johnson has a plan : he pledges to recover police numbers slashed to bailout the City of London since the 2008 Western economic crisis. As mayor, Johnson infamously favoured the use of increasingly draconian equipment to punish protest in London and his prisoner rehabilitation program is to “lock ‘em up and throw away the key”.

Given Corbyn’s lifelong commitment to the Irish civil rights struggle, it is also notable that if he forced his opponents like Johnson into committing to extra NHS spending – he has also cornered the ruling classes into staring Irish unity in the face. Given rising neoliberal inequality in Eire, it is possible a Corbyn government could ironically have slowed down the unification of Ulster with the Republic. Why would those in Northern Ireland have wanted to unite with a South de facto controlled from Brussels which has busily been promoting globalized neoliberal policies and increasing inequality right across the EU? As Johnson’s so-called BREXIT deal stands, it effectively paves the way for Irish unity, something former Tory parliament partners the DUP Unionist party identified, catalyzing the general election in the first place.

On the EU itself, Corbyn has opposed it throughout his political career. However, the successful case for BREXIT made by Nigel Farage has never been as loud on the left of UK politics. The 2008 financial crash created a new cadre of young progressive supporters of Labour bound by shared understanding of the power of identity politics but not that BREXIT could mean something other than xenophobia and racism. With the LEXIT case not being made properly since the days of Corbyn’s mentor Tony Benn, no circle could be squared demographically for uniting the progressive young who believed BREXIT meant right wing and the BREXIT Labour heartlands whose livelihoods had been wiped out by globalization. Put simply, if Corbyn had supported Remain – he would have lost the working class. If he supported BREXIT – he would have lost the cosmopolitan young. The “lose-lose” dichotomy defined his “neutral” General Election stance.

But again, if Corbyn has forced Boris Johnson’s Tories into albeit inefficient funding of a privatized NHS let alone BREXIT policies that foster the cause of the IRA  – he may also see Johnson carrying out a BREXIT which he has for so long desired. Despite Johnson’s successful “Get BREXIT Done” soundbite policy, this could be the most difficult of Corbyn’s under-the-radar successes. International capital does not want BREXIT and has not tolerated any EU population voting for exit from the EU. Clearly, multinationals find it much easier to control one central EU than scores of states. Brussels and Strasbourg are easier to manipulate, supranational legislation easier to lobby for and against. Though English elites motivated by nationalist ideology and idealistic visions of a tax haven off the shores of Europe have power – do they really have the power of more bourgeois facets of the global financial services industry? The same threats from those interests will be visible as Johnson attempts to “Get BREXIT done”.

This will include the de facto breakup of the UK vis a vis Ulster and an EU border down the Irish Sea but also the end of Scotland being part of the UK. There will be many establishment interests that cannot abide the break up of the UK and it is still unclear why the electorally victorious Scottish National Party was so quick to announce intentions for a de facto illegal Scottish referendum on independence. It’s clear from EU implicit support for the jailing of democratically elected politicians in Catalonia seeking independence from Spain that the EU will support London over Edinburgh in any illegal referendum. Scots have their own circle to square. The SNP supports Remain because of the EU’s economic importance for an independent Scotland. But the EU opposes an independent Scotland.

It was the great scholar Perry Anderson who outlined significant reasons why no new “Jerusalem” was created in Britain from the ashes of the second world war. The NHS is in effect just a remnant skeleton of what UK elites and masses envisaged would be the re-building of a nation shaken by Stalin’s ultimate victory against Nazism. Arguably for Anderson – when it came to top down explanations – it was the power of those who had witnessed absolutist politics, left or right, arriving in Britain as refugees of the Holocaust. Neoliberal thinkers arrived, warning the establishment of the dangers of all-encompassing political philosophies. There was nothing between socialism, communism and nazism. Go too far to the left and you are on the right, they said. An entire country which could recognize sewn internationalist trade union banners was primed for a new Jerusalem but by the second term of the Attlee government in the 1950s, the bourgeois battle against the left in his own government had led to the end of it.

Ironically, a new Jerusalem was being built elsewhere in the Middle East – a progressive working class project in Palestine. It was that absolutist project rooted in socialism but also in religious ethnicity that would end up in the Nakba – and internationalist UN condemnation of Israel. And which UK politician has been one of the most ardent at seeking to uphold UN resolutions and international law? Jeremy Corbyn, of course. No leader of any UK major political party has sought to uphold Palestinian civil rights like Corbyn. And as anyone who has seen the censored Al Jazeera documentary “The Lobby” knows, the Israeli state was quite aware of it. Israel, which without Anglo-American financial assistance could not exist, did its best to neutralize Jeremy Corbyn. Its chosen method was deploying propaganda about endemic anti-Semitism within the Labour Party. Given Corbyn’s personal story includes lifelong commitment to fighting bigotry and his own family has a history of street protest against fascist anti-Semitism, the criticism hurt him hard, personally. His response was lamentable, throwing his closest comrades under the bus. Already in the USA, those seeking a President Bernie Sanders in 2020 are warning supporters to fight fire with fire if Israel’s proxies dare to label a Jewish son whose family members were killed in the Holocaust – an “antisemite”.

Elsewhere, elite media continues to analyze the 2019 UK General Election as if the statistical facts don’t matter. While Jeremy Corbyn has built the largest socialist movement in Western Europe, media advocates something called “centrism” as if political parties are there to implement policies supported by floating voters instead of the other way around. Corbyn planted deep roots in the British political landscape, creating tensions and insecurities amongst the privileged that will not go away any time soon. One of Johnson’s most pressing concerns on behalf of the privileged will be to prevent a threat like Corbyn ever happening again. That will be the priority. They need not be so concerned by accusations of brutality – a series of scandals leading to UN claims of political and ideological barbarity by Johnson’s class against the country’s most vulnerable was easily brushed aside.

But as extra-parliamentary action against neoliberalism multiplies and with capitalism’s harm to the earth becoming clearer, the main takeaway from the election results of Friday 13th 2019 is arguably that of a hidden majority. It’s a majority that those in power – in the multinationals and media – do not want voters to know about. Yet it is central to democracy in Britain, itself.  Corbyn may have taken eleven million votes and Johnson fourteen – but sixteen million eligible voters did not vote at all.

A Unique Art of Living